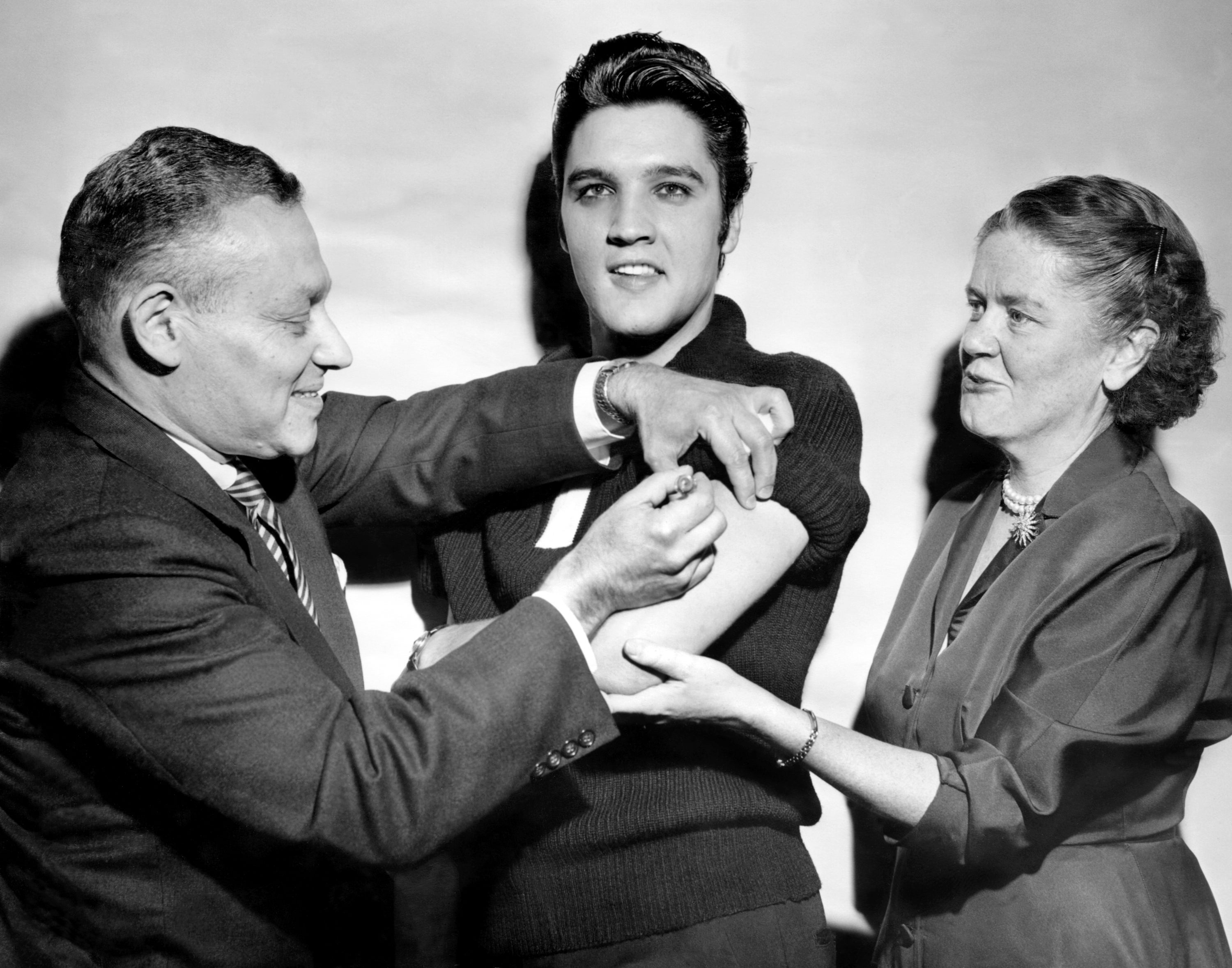 In late 1956, Elvis Presley was on the precipice of global stardom. “Heartbreak Hotel” had reached number one on the charts earlier that year and Love Me Tender, his debut film, would be released in November. In the midst of this trajectory, he was booked as a guest on the most popular TV show at the time, The Ed Sullivan Show. But he wasn’t only there to perform his hits. Before the show started, and in front of the press and Ed Sullivan himself, Presley flashed his swoon-worthy smile, rolled up his sleeves and let a New York state official stick a needle loaded up with the polio vaccine in his arm.

At that point, the polio virus had been ravaging the American landscape for years, and approximately 60,000 children were infected annually. By 1955, hope famously arrived in the form of Jonas Salk’s vaccine. But despite the literally crippling effects of the virus and the promising results of the vaccination, many Americans simply weren’t getting vaccinated. In fact, when Presley appeared on the Sullivan show, immunization levels among American teens were at an abysmal 0.6 percent.

You might think that threats to children’s health and life expectancy would be enough to motivate people to get vaccinated. Yet, convincing people to get a vaccine is a challenging endeavor. Intuitively, it seems like it would be wise to have doctors and other health officials communicate the need to receive the vaccine. Or, failing that, we might just need to give people more information about the effectiveness of the vaccine itself.

Clearly though, those aren’t winning strategies today, and they weren’t back in 1956. What did prove successful was Elvis getting the vaccine in front of millions. In fact, after he publicly did so, vaccination rates among American youth skyrocketed to 80 percent after just six months. Why might this be the case, and are there lessons that can be applied to the rollout of the COVID-19 vaccine?

We look to those around us to guide our own behavior, but we especially look to others who are in well-respected positions. For example, when researchers equipped a few dozen well-connected high school students with the tools to combat bullying, conflict rates decreased by about 30 percent, which was significantly more than other schools that did not participate in such training. Just like popular high school kids today, Elvis held a huge amount of sway over teenagers in the 1950s, which no doubt contributed to the success of his demonstration.

Beyond social influence, we are affected by social norms, or perceptions of what other people do and what other people think we should do. For instance, when hotel guests learned about energy conservation norms—specifically, what percentage of previous guests had recycled towels—their own energy conservation greatly increased. Witnessing Elvis get the polio vaccine may have similarly indicated a clear social norm: that getting vaccinated was an expected and approved behavior for teenagers nationally.

Finally, vivid events that focus on a single individual can profoundly affect awareness and behavior. Reports of thousands of deaths from the Syrian refugee crisis did not grip hearts and minds like the story of a single boy who drowned and washed up on the beach. And, after Kylie Minogue was diagnosed with breast cancer, there was a 101 percent increase in mammogram appointments for women 40–69 years old who had not previously been screened. Watching Elvis get vaccinated was far more powerful than any statistic, because it too was personal, emotional and vivid.

The COVID-19 vaccine will only live up to its promise if enough people actually end up getting vaccinated. The good news is that more than 60 percent of Americans are currently in support of taking the vaccine. With the arrival of new variants COVID-19, however, some public health officials maintain that upwards of 90 percent of the country will need to get vaccinated to create herd immunity. If only Elvis were still alive to harness social influence, social norms and vivid examples.

But even if he was, would he have made a difference? The reality is that in 2020, stardom and influence aren’t nearly as concentrated as they were when the King of Rock n’ Roll reigned supreme more than 60 years ago. Rather, there are now hundreds, if not thousands, of relevant “Elvises,” from nanoinfluencers with a small number of dedicated fans to the Kim Kardashians, Chrissy Teigens, Drakes and yes, Donald Trumps of the world, each of whom has tens of millions of followers.

The fact that Presidents Clinton, Bush and Obama have all agreed to publicly receive the vaccine, and that others like Vice President-elect Harris and Vice President Pence already have, is a great start. But while their actions may be vivid and set strong social norms, will they ultimately influence enough of the population? The Elvis demonstration was so effective because he was admired by the hardest-to-reach population (teenagers). But to the extent that many aspects of COVID-19 have been publicized, the key to influencing mass-level behavior may not lie in one single display. In order to truly move the needle (pun intended), it may be most effective to have a host of unlikely bedfellows—from Alexandria Ocasio-Cortez to Ivanka Trump to Tucker Carlson—publicly receive the vaccine. Ideally, they’d even do it at the same time, together.

Bit by bit, physicists are winnowing down the potential masses for hypothetical
The most ancient black hole ever discovered is so big it defies
COVID-19 vaccine rollouts are finally upon us. They hope that herd immunity—protection
Here’s a bumblebee tip that might get a slowpoke plant to bloom
Scientists have identified the traits that may make a person more likely
Go to Top